Skip to content
An inspiring documentary about hospice by a director famous for his horror films
Posted on October 12, 2018 by Kathleen Clohessy (Blog Writer, SevenPonds) 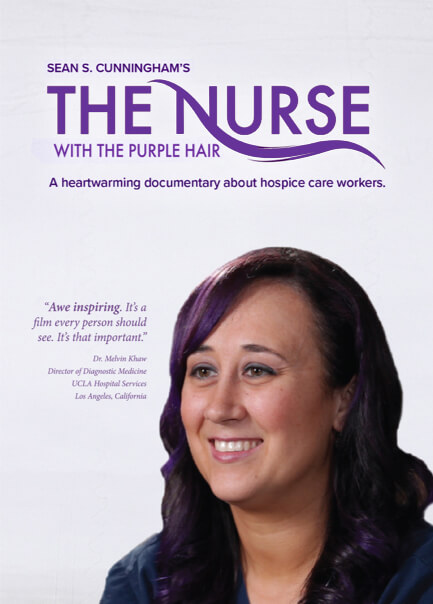 “The Nurse with the Purple Hair” is a heartwarming documentary about what it’s like to be a hospice worker and care for people at the end of their lives. Directed by Sean Cunningham of “Friday the 13th” fame, its “star” is hospice nurse Michele Lasota, R.N., a Philadelphia native who — true to the film’s title — sports a shining mane of dark purple hair. Michelle narrates most of the 48-minute film, but we also hear from a hospice social worker, a chaplain, an oncologist and several other caregivers on the hospice team.

The film opens with an introduction by Cunningham, who muses about why he has chosen, throughout his long career, to make films that depict “interesting and creative ways to watch people die.” Before introducing Michele, he talks a bit about how he sees these types of films as a “rite of passage” of sorts — a way to expose people to their deepest, darkest fears and then take them “safely to the other side” — much like hospice workers do. The big difference, he says, is that “I was focusing on movie deaths and Michelle was focusing on real death.”

Cunningham met Michelle when she was acting as his “tour guide” during a horror film convention in Los Angeles. When she told him what she did, he was inspired to learn more. He was also fascinated by her upbeat demeanor and positive attitude towards her work. “She wasn’t grim or morbid. In fact, she has a sense of fun about her, which I never would’ve imagined. And things that she’s told me have changed my life,” he said.

Unlike most documentaries about end-of-life, Cunningham’s film rarely shows the hospice team interacting with patients. Except for a very brief vignette at the beginning, it consists almost entirely of interviews with caregivers and family members, and teaching sessions for new hospice workers conducted by Michelle. It’s format is almost didactic — a fact I found a bit disappointing at first. It seemed somehow too detached to talk about these very intimate relationships without including the people who were dying in some way. But I soon became entranced by the deeply felt narratives of the team members and their obvious love for their patients and dedication to their roles. 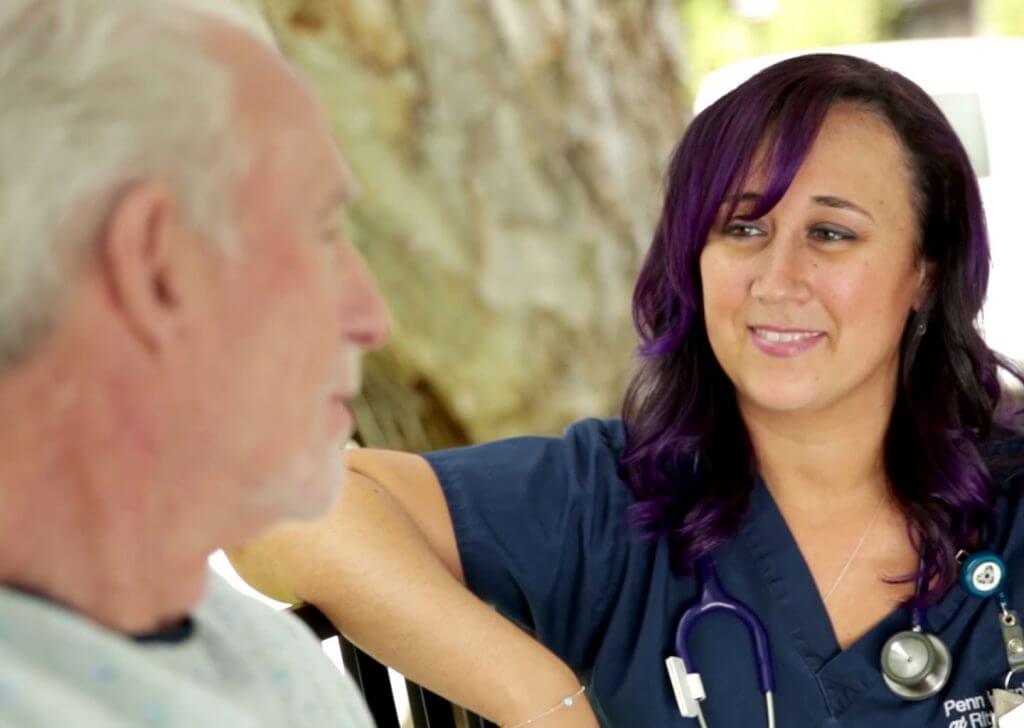 Michelle, in particular, is a wonderful storyteller who easily brings people and situations to life. In one of the most touching parts of the film, she tells us the story of a patient named Frank, with whom she had a six-year relationship before he eventually succumbed to liver disease brought on by 20 years of antiretroviral therapy for HIV. Frank was a haughty, proud, emotionally distant gay man, but despite his initial resistance, during the course of their relationship he and Michelle became fast friends. At one point, she tells us, he even gave her photos of himself from his acting days and videos of him dancing the ballet. Michelle shares these with the audience in the film: They are an incredibly beautiful window into the life of a man who shared little of himself with the world during his lifetime, and a tribute to the bond the two had.

“The Nurse with the Purple Hair” was produced by Crystal Lake Entertainment, the multimedia company behind Cunningham’s previous films, in partnership with the Conversation Project, an organization dedicated to helping people talk about their wishes for end-of-life care. Its message, according to the filmmakers, is to encourage people to “Be brave enough to have an end-of-life conversation that matters.” And in that respect, it certainly succeeds. After listening to Michelle and her caring, upbeat and positive team talk about their work, it’s almost impossible not to want to have a conversation about end of life with your loved ones before it’s too late.