Best known for horror hits Last House on The Left and Friday The 13th, US film-maker Sean S Cunningham's latest project is a documentary about the vital role played by hospice care workers. He spoke to David Roy about a charity screening in Belfast in aid of Northern Ireland Hospice 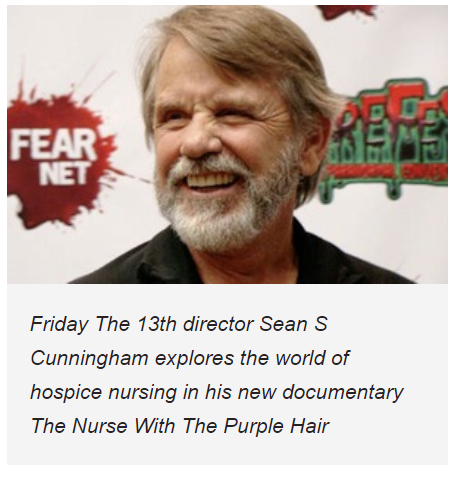 HE'S spent much of his career thinking up gruesome new ways to dispatch hapless American teenagers on the screen, but now horror director and producer Sean S Cunningham is dealing with death in a very different way with his new documentary, The Nurse With The Purple Hair.

The 45-minute film centres on Philadelphia nurse Michelle Lasota – she of the colourful 'do' which inspired the film's title – and her inspirational work as a hospice nurse.

Michelle shares moving stories of her time with hospice patients throughout the documentary, illustrating the bond that can form between the dying and those who help make their last days as comfortable and fulfilling as possible.

The New York-born director also follows the mother-of-two in her role as a 'preceptor' for nursing students, capturing her on-camera as she explains how hospice nurses assist the terminally ill as they approach the end of their lives.

It's an eye-opening, often heartwrenching watch, which reveals how hospice care is about maximising quality of life remaining while helping patients and family members get through an extremely emotionally distressing experience.

Indeed, Michelle – who first met Sean during a Canadian ComiCon event in 2015 – was motivated to switch from surgical nursing to specialising in hospice care after unexpectedly losing her own father in 2004.

"When we first met, I had this idea that her job must be depressing as hell," admits the director. "But she told me that it was about trying to make every day the best possible day it can be for her patients.

"In their world, the nurses are not there to 'fix' the patients – they're there to try to help them understand and get through this passage from life into death. I found these people remarkable."

Indeed, the Friday The 13th director – who will also take part in a Q&A after a special screening of his seminal 1980 slasher movie in aid of Northern Ireland Hospice on March 28 at Strand Arts Centre as part of the Belfast Film Festival – was so impressed by Michelle that he decided to make a documentary in order to tell the world about what she and her fellow hospice workers actually do.

Sean explains how America "turns a blind eye" toward discussions of mortality and that the prevailing cultural attitude to illness there is that it can be – will be – conquered.

Indeed, it seems that in America, the reality that some diseases simply cannot be overcome is something often not considered, discussed or planned for until it is too late, leaving families unprepared for how to cope with their loved one's terminal illness and in dire need of a helping hand – which is where hospice nurses play such a crucial, often unsung role.

"We're like, 'We're gonna kick the s*** out of that cancer!'", he laughs. "I don't know what it's like in Ireland, but in America no-one wants to talk about death or dying. People don't often talk about 'Well, would you like to be on life support?' And what that can do to families is devastating.

"All of a sudden, grandma is dying and now people are all upset about what she 'would have wanted'. It's like, 'Well, if you'd ever asked her, then you'd know!'

He also points out that there's a general lack of understanding about hospice even among other healthcare professionals in the US.

"As [US comedian] Rodney Dangerfield would have put it, 'Hospice care workers, they don't get no respect!'," explains Sean, who tells me it was "a privilege" to be able to document Michelle and her fellow hospice workers.

"Even other doctors and nurses don't understand what they do. Hopefully, this film will be a little bit of a window into that world so that it maybe it will start to be considered a little bit differently.

"Michelle says she hopes that after seeing this movie, people will be brave enough to start a conversation that matters."

The director's plan for The Nurse With The Purple hair is to make it available to medical schools, nursing schools and hospitals, as well as every hospice worker, "so that they can show it to their friends and family just as a way of explaining what it is they do."

Sean adds: "I'm looking forward to seeing how the people in Belfast receive it."

:: The Nurse With The Purple Hair screens at Movie House Dublin Road in Belfast on Wednesday March 29. Sean S Cunningham and Michelle Lasota will be in attendance. Tickets and full information available